I sense from Chekok’s narrative that all three are quite self-centered. The protagonist of the entire narrative is neither the one who made the proposal out of love nor the one who did so but was accepted because of it. Marriage has no significance. I believe that the issue in this narrative is a reflection of modern humans in that we frequently act selfishly and without considering the repercussions of our actions.

Chekov also depicts aspects of a relatively conventional marriage. Although it is no longer customary for a woman to ask her parents for permission before getting married, many characteristics of traditional marriage are still valid today. A long-standing and somewhat peculiar tradition has it that the male always makes the proposal on stage.

I think Chekhov’s (marriage) is ironic in that the three characters in the story are very greedy people.

Chubkov was a greedy landowner because he could sell his daughter for money.

Romov proposed marriage simply because he needed a woman. He has such low self esteem that even a little thing can make him suffer from cramps until he faints. Being petty, he would argue with a woman over a pointless matter and forget why he proposed to her. He never considers what dignity is for self interest, and interest is his greatest purpose.

Natalya’s outlook on life has only interests in it. She can quarrel with the person she wants to marry over a dog that has nothing to do with marriage in a state of desperate marriage, and can continue to argue while getting engaged.

The summary of the whole story is that the person who proposes is not because of love, nor is the suitor who accepts because of love. Marriage is not as important as a piece of grass or two dogs. In the process of this proposal, there are insults and curses. And the marriage proposal turned out to be a success. I think the problem shown in this story is the same as modern people, we are always focused on showing our good side to others, we only do things for our own benefit without thinking about the consequences.

Proposals have been become a large deal over the years. Many people care about how grand their proposal is. It has become such a big deal that many people believe the sincere part of proposals have been stripped away and many people believe them to be stupid. In the play the main character is extremely nervous about proposing and it gets worse as the play goes on. They begin to argue over who owns the field and completely forget about the reason he came over in the first place. After Natalia realizes he came to propose her tone changes.

Many people focus on the proposal and forget about the real work that is to be done after marriage.

In his play, Anton Chekhov has Ivan Lomov boasting and trying to show off his inheritance to Natalya before proposing to her. This is before they start to argue about who owns the oxen meadows next to the Stepanova’s birchwoods. Ivan letting Natalya know about the land he owns is a bit similar to people today buying big, shiny diamond rings and finding expensive places to propose at to let others and their partner know that you have valuables to offer. I think that Chekhov is saying that marriage proposals are usually just a way for people to show off and let others what they have even if it’s just your partner. In the end it’s all about boosting one’s egos and feeling like “The man”, demonstrating the performative aspect of marriage proposals, especially public ones.

Chekhov demonstrates this idea of “Symbolic gendering” by having Ivan ask Natalya’s father for her hand in marriage. I think that “The Marriage Proposal” is outdated with its execution; however, it still does a good job at demonstrating the gender roles of marriage proposals and how they should be. Instead of using land and livestock to convince your partner to marry you, men use rings, trips and specific places to show that they are “worthy” of a “Yes!”.

In “Marriage Proposals”  Chekov is highlighting the fact that the traditions of marriage and proposals both have not changed. He essentially mocks the idea of the proposal by showing that the feelings expressed or felt by the characters can completely contradict the circumstances, or how they actually feel about the other person. In reference Kitchener’s article, Chekov is in a way, agreeing with her point of view that proposals are stupid, overemphasized while highlighting that they can be completely theatrical while lacking true meaning.

Chekov also shows that the societal view on marriage, even in contemporary marriages, are largely impacted by gender roles. This relates to the point made in the article regarding symbolic gendering. Chekov shows elements of very traditional marriages such as the man asking the woman’s father for permission to marry his daughter. This still occurs occasionally in contemporary marriages/proposals, yet it is ultimately outdated. The practice of asking parental permission for a woman’s hand in marriage is certainly falling out of the societal norm, however many aspects of traditional marriage shown are still relevant today. The theatrical performance of the proposal itself is a long-standing and slightly unusual tradition, as is the depiction of only men proposing to women. 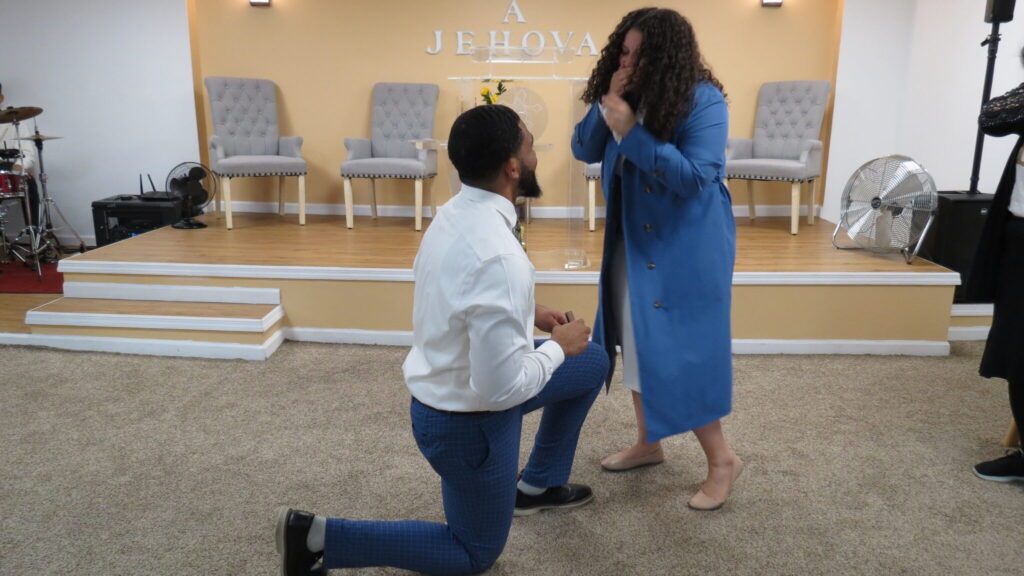 In the beginning of Chekhov’s play the main character Yvonne displays severe anxiety leading up to asking Natasha’s father for his blessing on proposing to Natasha. He begins to question his motive for proposing to Natasha. He states, “You just keep thinking about it and you argue back and forth and talk a lot and wait for the ideal woman to offer true love and you’ll never get married, awfully cold in here.” This shows that Yvonne is not sure if he really wants to propose to her, and also that he is only proposing because he feels he has no other option. As the movie went on, the couple discovered they had many differences, however because they both had the desire to be married, they both agreed to marry each other.

I believe the marriage proposal is a mixture of outdated commentary but also still used today. Many couples want an extravagant marriage proposal or are desperate to get married because that is what is expected of them, while others are comfortable with just living with their partner and continuing to be together without getting married. It is not a requirement to have a large engagement, there have been many proposals that are just the couple. Some engagements are just immediate family members. Today’s society prioritizes their social media appearance; however many also prioritize their privacy and intimate moments. For example, Ariana Grande got married in the comfort of her own home, however no one knew until she displayed it on social media. Society has become more accepting of being with your partner for long periods of time, as well as being an unmarried adult and not being shamed for it.

In the context of moral criticism, Plato believed that art and poets in particular simply existed to poorly hold a mirror up to nature and lacked intelligence and depth, and that the arts should exist to teach piety and virtue. In the play “Mine Eyes Have Seen”, elements of both of these ideas are shown. The play primarily holds a mirror up to nature as Plato would say, in that it highlights the hardships rooted in racism that the main characters are forced to go through and it shows the condition of society at the time. However, I do not believe that the play does this poorly as Plato would suggest, as it vividly puts the reader into the circumstances of the characters invoking empathy. Nonetheless, this would mean that the play defies moral criticism

The argument can be made that through holding the mirror up to nature, particularly the racist ideals in society at the time the play is teaching virtue. Piety is not necessarily expressed in the play, however exposing the hateful nature of human beings I believe creates awareness and invokes empathy in the readers which in turn teaches virtue.

This play signifies a crucial theme within marriages. The reoccurring instance is that marriages aren’t entirely based on love, but are rather driven by other factors. In this case, wealth drives marriage in this play. The two don’t even seem to show much care towards each other, as during the argument between Lomov and Natalya over ownership of land, she continues to pressure him even as his pains begin to worsen, rather than attempt to relieve his stress. The interaction between the two is not as most romance movies portray marriage, and is full of pettiness and bickering between the two, resulting in the opposite of what the audience is used to seeing. Towards the end, he also has no real idea why he married her and seems to go with the flow, not realizing how big of a commitment he has made. They are simply all greedy to get the benefit out of each other, instead of truly becoming one together.

I believe it can be argued whether or not this play exemplifies moral criticism. In my opinion, the best example that adheres to piety and virtue is the main cause of one of the characters not wanting to go to war. His father was lynched, and he blames his country which was in a time period where people of his color were not respected. He takes this and uses it as his reason to not go to war and support and country that took his father away from him. This shows that the actions that were taken towards him had negative consequences that show through his demeanor in the play and that the treatment towards him was wrong, allowing his actions to be justified.